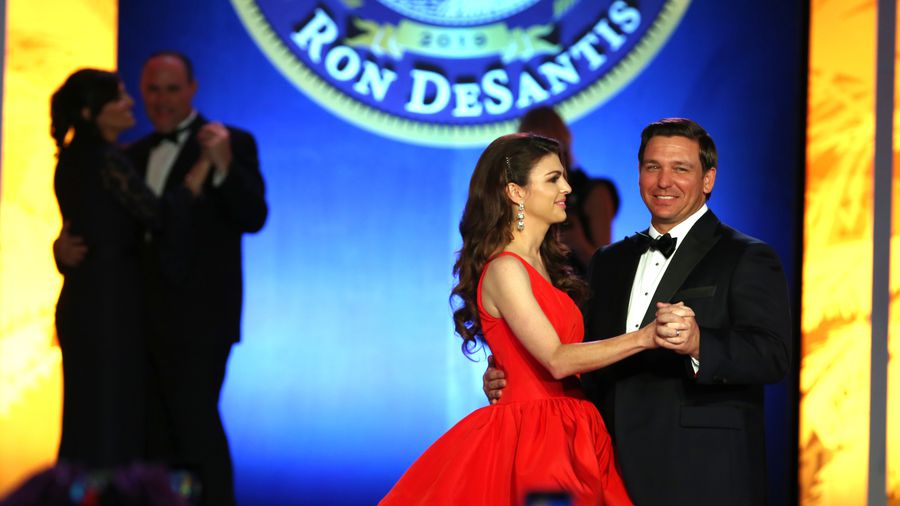 Center stage— Florida Gov. Ron DeSantis will be sworn in for a second term on the steps of the Old Capitol today with a fair amount of the nation’s political world waiting and watching to see what the Republican star and likely presidential contender will say and do next.

The moment — But DeSantis enters his fifth year in office with several lingering questions, including the big one about his own future.

What to listen for— Will he use his second inaugural speech to simply recount again the highlights of the past four years — including his well-documented battles over Covid-19 policies — or will he lay out an agenda for his second term … however long that may last.

The road ahead— DeSantis has made it clear that he’s prepared to loosen the state’s concealed weapons law and tighten further abortion restrictions, as part of an expected run-up to an anticipated presidential announcement. But will he delve into those topics or will he instead use his inaugural address to compare and contrast his record with President Joe Biden in an obvious signal to his future intentions.

Last time— Four years ago DeSantis — in a speech that lasted a succinct 16 minutes — pledged that he would “not be a rudderless vessel in this endeavor” and outlined priorities for education and the environment as a well as promise to tackle immigration issues. While DeSantis did focus on those issues during his first term, his inaugural address in 2019 did not forecast the battles ahead on the pandemic as well as several other flashpoints that have come to define him.

Words — Expect a lot of pundits from D.C. to New York to Miami and beyond to listen for any meaningful clues in what is said and what isn’t said.

— WHERE’S RON? — Gov. DeSantis will be in Tallahassee for his inauguration, which will include the swearing-in ceremony on the steps of the Old Capitol and an inaugural ball at the Donald L. Tucker Civic Center.
Have a tip, story, suggestion, birthday, anniversary, new job, or any other nugget for Playbook? Get in touch.

COMING ATTRACTIONS— “DeSantis second inauguration is being watched closely as a preview of what’s to come,” by Miami Herald’s Mary Ellen Klas: “Ron DeSantis will be sworn in Tuesday to his second term as Florida’s 46th governor, and it is already being seen as the start of his audition for the presidency. DeSantis has positioned himself on the national stage as a likely front-runner for the Republican nomination for president in 2024, but that requires him to launch a campaign for a new job while barely into the four-year term for his current one.”

Florida Gov. Ron DeSantis speaks to the Republican Jewish Coalition in November. DeSantis will be sworn in on Tuesday to a second term in office amid signs that he will run for president. | Scott Olson/Getty Images.

TWO DAYS AND DONE — In the past, inaugural events have stretched out over several days and have even included parades. The DeSantis inauguration is confined to a short two-day window that will feature smaller private events. This included a candlelight dinner with donors and supporters on Florida State University’s campus on Monday evening. The events on Tuesday include the swearing-in, a “Toast to One Million Mamas” event at the governor’s mansion and the inaugural ball at the Donald L. Tucker Civic Center.

Not this time— DeSantis, four years ago, held a prayer breakfast on the campus of Florida A&M University, which is a traditional event that has been held by previous governors including both Jeb Bush and Rick Scott. Instead of the breakfast, DeSantis will have a closed “Florida Faith Leaders Prayer” event.

Also happening— Florida Cabinet members plan to participate in the governor’s inaugural events, although Chief Financial Officer Jimmy Patronis did have a separate party on Monday. Incoming Agriculture Commissioner Wilton Simpson is scheduled to hold a “Fresh from Florida” open house in the Capitol following the inauguration.

FLORIDA DEMOCRATS PAY HEFTY FINE OVER 2020— Florida Democrats, who have been reeling over the last few years, agreed to pay a $43,000 civil penalty to the Federal Elections Commission to settle campaign finance violations that occurred during the 2020 campaign.

The agreement with the FEC was approved in late November and was made public late last week.
The document posted by federal regulators states that Democrats failed to report nearly $285,000 in debts incurred during the 2020 election cycle and that Democrats accepted excessive and prohibited contributions. The agreement states that “during the 2020 calendar year, the committee accepted contributions that exceeded $10,000 in the aggregate from 10 individuals, which totaled $175,200.”

The settlement does note that the party took corrective actions, including refunding and returning contributions and that “respondent contends that, as a result of its 2020 compliance challenges, it hired a new compliance firm in late 2020 which undertook an extensive review of its 2020 financial activity.”

— New data shows the folly of Trump’s crusade against early voting, by POLITICO’s Jessica Piper
DOWN TO THE WIRE— Conservatives threaten to withhold critical McCarthy support, hours before speaker vote, by POLITICO’s Olivia Beavers and Jordain Carney: Rep. Kevin McCarthy met briefly with Rep. Matt Gaetz (R-Fla.), one of his most ardent opponents, as well as Reps. Scott Perry (R-Pa.) and Lauren Boebert (R-Colo.), neither of whom have committed to voting for the California Republican. But while Gaetz quipped heading into the meeting that they could be on “the verge of a New Year’s miracle,” he said afterward that the talk was “brief and productive” — and, critically, that he and five others are still “no” votes.

CAUTION — ‘We better watch out’: NASA boss sounds alarm on Chinese moon ambitions, by POLITICO’s Bryan Bender: The race to the moon between the United States and China is getting tighter and the next two years could determine who gains the upper hand. So says NASA Administrator Bill Nelson, who warns that Beijing could establish a foothold and try to dominate the most resource-rich locations on the lunar surface — or even keep the U.S. out.

NEXT CHAPTER— “Jared Moskowitz, lone new member of Congress from South Florida, prepares for two years as Democrat in Republican-ruled House,” by South Florida Sun-Sentinel’s Anthony Man: “And he comes with another unique credential: He was a Democratic agency head, running the Division of Emergency Management for most of Republican Gov. Ron DeSantis’ first term. ‘He’s not really coming in as a rookie,’ said U.S. Rep. Lois Frankel, D-West Palm Beach, who has served in the majority and the minority in the House and years ago, like [Jared] Moskowitz, was a Democrat in the Republican-controlled Florida House.”