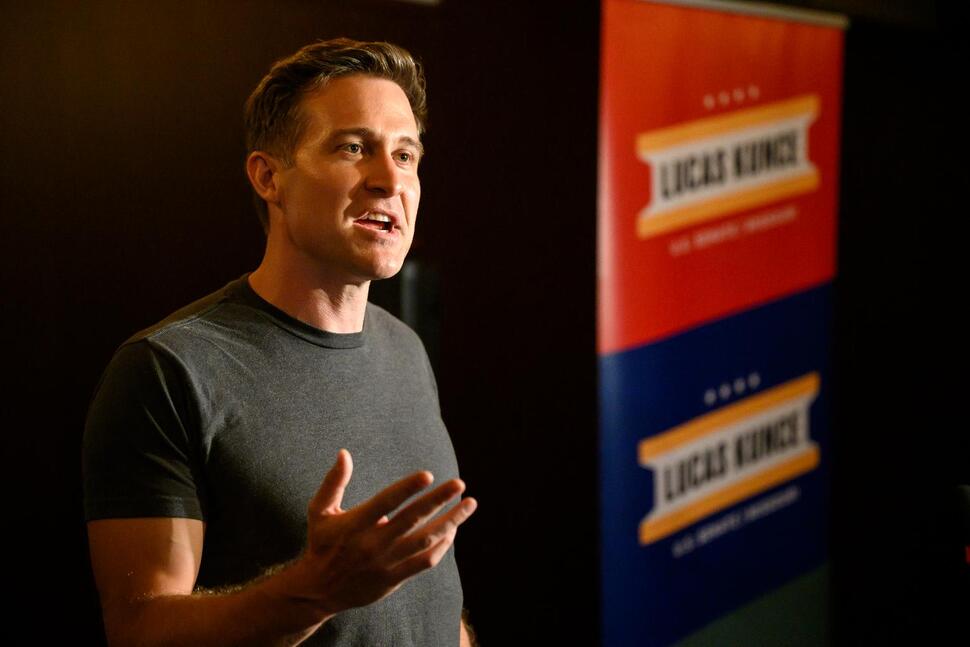 Two years to the day since U.S. Sen. Josh Hawley’s now-famous raised-fist salute to rioters at the U.S. Capitol, a Marine veteran who ran unsuccessfully for Senate in 2022 has announced that he’ll try to unseat Hawley in 2024.

Two years to the day since U.S. Sen. Josh Hawley’s now-famous raised-fist salute to rioters at the U.S. Capitol, a Marine veteran who ran unsuccessfully for Senate in 2022 announced Friday that he’ll try to unseat Hawley in 2024.

Lucas Kunce, 40, served 13 years in the Marines. A video released by his campaign shows the photo of Hawley with his fist raised on Jan. 6, 2021 — a photo that drew strong criticism from some, but also appears on coffee mugs that the senator sells. Kunce’s video also shows security camera footage of Hawley running through the Capitol hallway in the chaotic aftermath of the attack.

“I swear, this coward’s always running from something,” Kunce says in the video. “When things get tough, Missourians deserve a U.S. senator who will stand up for them, not run away.”

Kyle Plotkin, a spokesman for the Hawley campaign, dismissed the Kunce announcement.

“We welcome this desperate woke activist to yet another political race,” Plotkin said in an email. “He just barely finished losing his last one. Maybe he’s running in the wrong state.”

material may not be published, broadcast, rewritten or redistributed.

Kunce was among several candidates running for Senate in 2022 after two-term incumbent Roy Blunt announced his plans to retire, and seemed headed for the Democratic nomination before the late entry of Anheuser-Busch brewing heir Trudy Busch Valentine. She narrowly defeated Kunce in the August primary, then was soundly defeated by Republican Eric Schmitt in November.

Kunce faces long odds in 2024. Missouri, a swing state a generation ago, has moved decidedly to the right over the past decade. Every statewide elected official in Missouri is now a Republican.

Kunce did show significant fundraising skills last year, outraising every candidate, even Republicans. He fashioned himself as a populist and his campaign announcement for 2024 cited his military history and his family’s financial hardships when he grew up in Jefferson City.

Hawley, 43, is in his first term as senator. He was elected Missouri attorney general in 2016 before successfully running for Senate in 2018.

The week before the attack on the U.S. Capitol two years ago, Hawley became the first Republican senator to announce he would object to the certification of the 2020 presidential election. After the release of the photo showing him with his fist raised, a one-time mentor, former U.S. Sen. John Danforth of Missouri, called supporting Hawley “the worst decision I’ve ever made in my life.”

Copyright 2023 The Associated Press. All rights reserved. This material may not be published, broadcast, rewritten or redistributed.