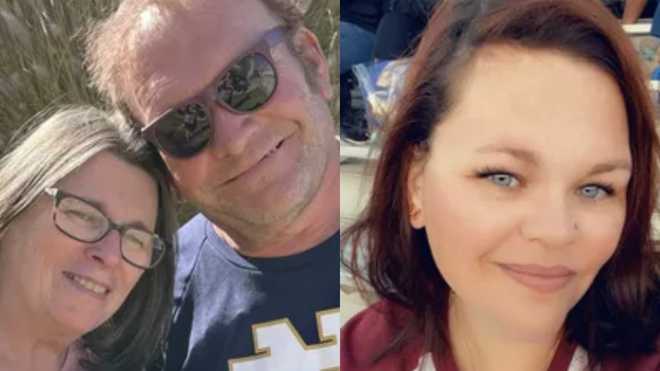 The suspect in a triple homicide who died in a shootout with police Friday in Southern California apparently drove across the country to meet a teen girl he catfished online, before killing three of her family members, police said.
Austin Lee Edwards, 28, also likely set fire to the family’s home in Riverside, California, before leaving with the girl, the Riverside Police Department announced .

Edwards, who police said lived in North Chesterfield, Virginia, met the girl online and obtained her personal information by deceiving her with a false identity, known as “catfishing.”

Three bodies found in the family’s home were identified by police as the girl’s grandparents, Mark Winek, 69, his wife, Sharie Winek, 65, and the girl’s mother, Brooke Winek, 38.

Their respective cause of death remained under investigation Monday, police said.

The cause of the fire at the home – about 50 miles southeast of Los Angeles – also remained under investigation, police said, but appeared to have been “intentionally ignited.”

According to police, Edwards developed a relationship with the teen online and then travelled from Virginia to Riverside and parked his vehicle in a neighbor’s driveway. Police said he then walked to the teen’s home in the La Sierra South neighborhood.

At some point, police said, Edwards killed the teen’s grandfather, grandmother and mother before returning to his vehicle with the teen and leaving.

Police in Riverside were initially called to the girl’s home late Friday morning to check on the welfare of a girl who appeared distressed while getting into a Red Kia Soul with a man, police said.

Investigators later determined the two people were Edwards and the teenager, whose age was not released.
While officers were responding, police began to receive calls about a structural fire just a few houses away from where the welfare call was reported, they said.

The Riverside Fire Department arrived at the home and found a fire on the first floor. When they got inside, police said, they discovered three bodies.

Several hours later, authorities were able to track Edwards’ vehicle down as he was driving with the teen through San Bernardino County in the unincorporated area of Kelso.

When deputies caught up to Edwards, police said, he opened fire on them, before being fatally shot by at least one deputy.

Officials said Edwards worked for the Washington County Sheriff’s Office. He also worked for the Virginia State Police before he resigned from that agency in late October.

“This is yet another horrific reminder of the predators existing online who prey on our children,” Riverside Police Chief Larry Gonzalez said. “If you’ve already had a conversation

with your kids on how to be safe online and on social media, have it again.  If not, start it now to better protect.